Starting RIOT in Renfrewshire with the Library Fund 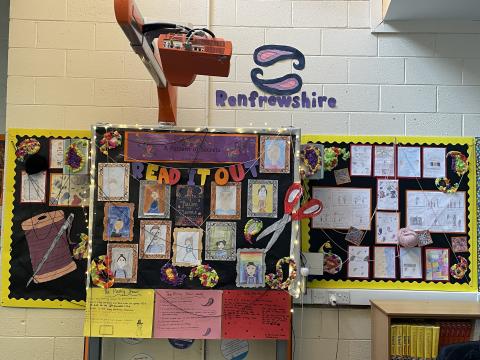 Renfrewshire Libraries were successful in receiving a grant as part of last year's Reading Challenge Library Fund and ran a RIOT (Read It Out Time) project with primary schools across the local authority. Jacquelyn Else-Jack, Primary Outreach Librarian, tells us how it worked.

When I first had the idea for the RIOT in Renfrewshire project I gave my boss a fright.  Upon first reading my email on the idea he thought for a moment I was reporting an actual riot in the primary schools in Renfrewshire. Once he’d recovered, he agreed it was a project worth pursuing. I then put in a proposal for funding from the First Minister's Reading Challenge Library Fund and was delighted to be awarded £500 and given the go ahead for the project.

So what is RIOT in Renfrewshire?  RIOT stands for Read It Out Time and it was a project I was able to offer to all primary schools in Renfrewshire. The idea was to experience a book being read out loud in a variety of ways and explore more deeply some of the themes presented within the story. It also meant children could experience stories despite the lockdown. In the end, twelve schools with thirty P6 and P7 classes took part with engagement through Twitter during the project and each school was able to participate in a way that suited them.

The chosen book was A Pattern of Secrets by local author, Lindsay Littleson, which is set in Victorian Paisley, featuring the lives of two children whose lives intertwine through the declining weaving industry. A digital project guide made with Sway was used to deliver the project to schools, together with a copy of the book for each teacher.  It included videos of the author and librarians reading chapters aloud with suggestions of how the other chapters could be read within the classroom setting, including mystery readers and the pupils themselves.

Other facets to the project included a research element for pupils to make an information sheet on what services would be available to help the main character Jim, if he was alive today and facing poverty. The author, who is also a primary teacher, included research resources in the guide for classes to dig deeper. I was also able to tie in two other projects happening at the same time; one with hands-on weaving, which was provided through the museum service, and one which included a history tour of Paisley Town Centre.

It was a real opportunity to promote relevant library resources, particularly digital resources, which were vital during lockdown, especially the ebooks, audio books and reference sources like Encyclopaedia Britannica.

The legacy of RIOT

Central to the project was a ‘Setting the Scene’ competition with a prize for the winning entry, which was chosen by the author.  Schools really enjoyed this element and we had some lovely entries but the winners, St Anne’s Primary, had incorporated so many of the key facets of the project in a very creative and eye-catching way.

At the end of the project, a digital guide was created with a video of the author reading the final chapter of the book and announcing the winning school. The project is still at large as an ongoing ‘RIOT Read’ with a class set of books and a digital guide for schools to use and take part in.

Applications for the Library Fund are currently open! If you're interested in running an event with schools in your area, submit an application by Thursday 18 November.