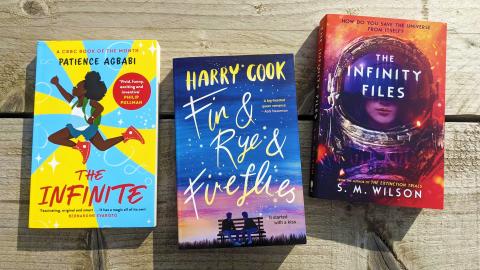 Perth Academy has been participating in various book reviewing schemes in past years and we were delighted when we saw the fantastic shortlist for the 2020-21 Scottish Teenage Book Prize! We decided it would make a great selection for our reviews with pupils during the term.

The first thing we did was bite the bullet and purchase 10 copies of each of the books from our library budget so that we would have plenty of books to distribute to willing reviewers. We visited 4 classes in the English department - a mixture of S2 and S3 - gave an overview and read out the blurbs to recruit participants. In retrospect, we could have used our school’s News Broadcast to recruit additional pupils. About 25 pupils signed up initially. We had all of the books in stock and issued them to pupils that had volunteered. Mrs Trotter, our Learning Resource Assistant then created a Team on our school’s virtual platform. We started in October so that pupils had lots of time to finish the three books. The short reviews and marks out of 5 were to be added onto a very simple document on the Team. Mrs Trotter created an imaginative display in the library with blurbs about the three books and pupils’ reviews. Their reviews were posted on the Reading Cloud, which is our circulation software.

Pupils got stuck in straightaway and there was a good-natured, competitive spirit in the group. One pupil suggested that we give a small prize to pupils who had finished all three books, so we took that suggestion on board. Pupils enjoyed getting this recognition and we presented the prizes in English classes – simple but effective! We also awarded House Points to participants.

The second lockdown then ensued, and we were able to continue with the project because we had the Team set up. We offered a click-and-collect service in two locations and were able to distribute any books needed with that service. We tried to be as positive as possible and were aware that some of the original participants would not continue, for various reasons. We used Teams to chase up the participants and to get as many through the reviewing as possible. It was a team effort and having a double-staffed library and good technology really helped! We work very well with the English department and were grateful for their cooperation and enthusiasm.

Now, for our future plans. Since we had purchased multiple copies of the books, one of our smaller S1 classes was able to use White Eagles by Elizabeth Wein as a class reader. They had intended to do an extended project based on the book which would have included studying various aspects of being a pilot, using a large map and learning about the countries that the plane flew through, and learning about women in male-dominated jobs.

We also plan to include the titles in our S2 reading incentive for next session. One of the reading tasks is to read a prize-winning book or one that has been shortlisted for a prize, so the Scottish Teenage Book Prize selection is perfect!

Pupils really enjoyed reading the shortlist and using it as part of the reviewing scheme. Here are some quotes from those involved:

"I read a wider variety of genres and books that I otherwise would not have read because I took part." - Abigail

"I had in general a lot of fun reading these books, and I don’t usually read." - Christoph

"I loved reading these books. They were a great variety!" - Lewis

"I loved all of the books and would recommend them all to people of different age groups. I enjoyed taking part in the Scottish Teenage Book Prize immensely but I would have to say my favourite book by quite a bit was 'The Gifted, the Talented and Me.' It made me laugh until I cried." - Alistair

And finally, a quote from Mr Digney – our Acting PT English: “Pupils loved being involved in the Scottish Teenage Book Prize project. In particular they liked the variety of the shortlisted texts, as well as having something enjoyable to do during the uncertainties of the remote learning period, being able to communicate with their peers and our fantastic library staff via our online platform.”