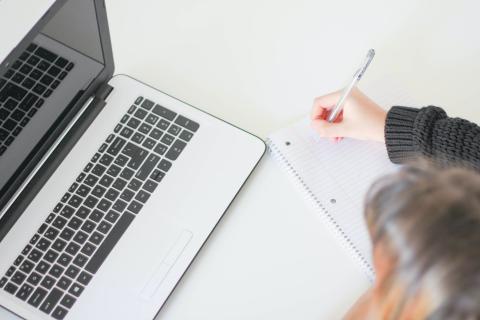 As part of the First Minister's Reading Challenge, Douglas Academy in East Dunbartonshire received Creative Workshop funding in November 2019 for an exciting Scots language project. School Librarian Shiona McConnachie shares how they adapted their plans in the face of the coronavirus pandemic and used virtual author visits to engage pupils.

Our original plan was a project working with 11 pupils in the S2 Literacy Group focusing on Scots language. We hoped to engage Matthew Fitt to work with pupils to explore Scottish words and creative writing techniques. The project would culminate in a small publication of pupils’ work and launch event involving families and the local community. Due to the pandemic, this was no longer possible so our new plan was to arrange author sessions virtually, and unfortunately with no community involvement.

We were successful in engaging Scots author Matthew Fitt to work with our Literacy Group (now S3) over two virtual sessions. Workshops involved Matthew reading (and singing) in Scots. Matthew introduced pupils to Scots words and phrases, many of which were familiar to the pupils. Pupils had to create their own poem using different Scots words and phrases in a ‘Scots Mash Up Mixter Maxter’. The second session developed the pupils’ knowledge and skills in Scots further, culminating in pupils (working in pairs) creating their own short drama focusing on the theme of conflict. Both sessions were very engaging and lively with pupils enjoying using Scots language and relating well with the author via a virtual medium.

The impact of the sessions

Feedback from the pupils involved was very positive and they are keen to learn more about the Scots language. Third year pupil Lauren commented:

'We felt really involved even though the lesson was virtual.' Asked to sum it up in one word, she said, 'Braw'.

Matthew Fitt said ‘I enjoyed the sessions immensely. Although I was frustrated we couldn’t meet in person, we still managed through the online format to run and enjoy the workshops together. The pupils were wonderful, responded very well and I’m confident they will go on to produce some high quality writing in Scots’.

Although the original literacy project was not possible due to current restrictions, the target group benefitted greatly from the two virtual author workshops. The pupils in our Literacy Groups are among those most affected by the pandemic both in terms of learning loss and in confidence. Matthew engaged well with them, using fun techniques, and showing pupils they already had a good knowledge of Scots language.

Despite initial reservations over using technology for a remote virtual visit, the medium (Microsoft Teams) worked well and the pupils were very engaged. This was due to considerable planning with a trial meeting held involving Matthew, the Librarian, the IT Co-ordinator and class teacher. It also relied heavily on a hands on approach by the two teachers supporting the class. The use of a visualiser allowed more flexibility to view the classroom environment and made it seem less remote for the author. The use of Microsoft Teams has been a considerable learning curve for both school staff and the author concerned but has shown that using this medium can be very beneficial, particularly during current restrictions.

Browse the Live Literature Author Directory to find a wide variety of writers, poets, illustrators and storytellers working in Scotland.