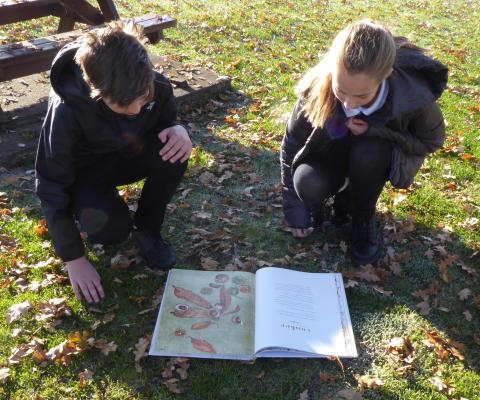 As the result of a successful Crowdfunder in 2018, every school in Scotland received a copy of The Lost Words. With acrostic 'spells' by Robert Macfarlane and beautiful watercolour artwork by Jackie Morris, this book conjures back to life some natural words like bluebell, otter and dandelion which are fading from use.

In this blog, a primary school teacher and an outdoor learning educator share how they used The Lost Words to take learning outdoors and complete their own John Muir Award. The Lost Words captivated pupils with its references to magic and spells, and gave teachers the confidence to take learning outside the classroom. Using this resource outdoors, even on a cold winter’s day, encourages even the most reluctant readers and writers to get involved.

I loved the book, and when I introduced it to my class they were captivated. They were intrigued by the idea of it being a book of spells that could bring back lost words. Each time I opened the book they would sit in total silence as we all guessed the spell from the beautiful illustrations.

My starting point was the John Muir Trust, where I found lots of new ideas. The class decided to create their own book by researching online and in nature guidebooks. Even the most reluctant writers put in a lot of effort and children who would never dream of reading out their work were proud to read out their spells on video. The Lost Words really is a super resource to reconnect children with the natural world and to stimulate creative writing and a love of reading.

To write this blog, I went into P7 and asked if I could have a few quotes from the children who had been involved. During the week children appeared at my door or notes were left on my desk and I was delighted that many of these were from the more reluctant readers and writers. Here is a small sample of what the children thought:

“The Lost Words was magical and tells a story of each lost word. I enjoyed every minute and I hope it will go on forever and I hope nature does too. I enjoyed it so much.”

“I loved it. I loved all the wildlife and the poems. It was fantastic and we wrote poems ourselves.”

On a blustery January morning, we hunkered down in a tent in Culag Woods. The pupils were about to embark upon an exploration of The Lost Words – words that had been removed from the Oxford Junior Dictionary due to lack of use.

We talked about urbanisation and how it has led to an increased number of technology-based words. Pupils also discussed how more access to outdoor spaces is needed and that interaction with animals and plants is a good thing to encourage. The consensus was that while it’s important to include new words, the natural words should remain too. 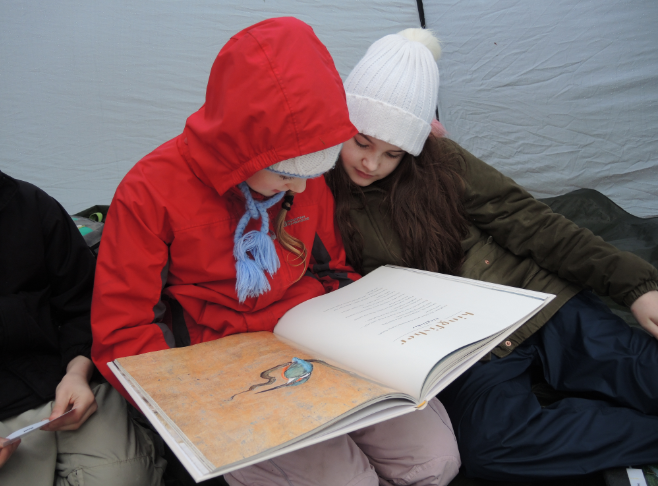 We introduced The Lost Words as a response to the issue, and read the introduction aloud: “once upon a time, words began to vanish from the language of children…” By the time the closing sentence was uttered, the group were held in a spellbound silence.

All hands shot eagerly up into the air when asked if they wanted to conjure back one of the lost words with a spell. Each pupil took their turn to read one out. It was magical to hear the beating of the rain on the tent providing a dramatic rhythm to the spoken word. We decided to create our own spell book and spent time exploring the woods and flicking through the book, as well as drawing, painting and modeling. We played around with words and wrote spells for our favourite plants and creatures.

What is so beautiful about the book is that it acts as a vital puzzle piece to understanding the natural world, while also providing an excellent resource for cross-curricular-learning.

Free resources available from the John Muir Award website include: